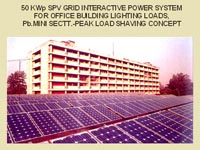 Energy Conservation is one of the most crucial subjects today and Punjab is endowed with vast potential of solar energy with over 300 days of sunshine in a year and this key Renewable Energy Source is being efficiently exploited by PEDA. As the state is endowed with vast potential of solar energy estimated at 4-7 KWH/Sq.mtr of solar insolation levels and the Government is also keen to tap this resource for strengthening power infrastructure in the State by setting up Solar Energy based power projects so as to save the depleting resources for our future generation and to combat global warming, fast depleting conventional sources of energy and resultant increased environmental pollution.

PEDA with its untiring efforts has successfully commissioned the following projects:-

Under Ministry of New and Renewable Energy, Govt. of India, programme for Demonstration of Grid Interactive Solar Photovoltaic System, 2 Nos. (50 Kwp Capacity each) Grid Interactive Power Plant has been installed at Mini Sectt. Building, Chandigarh and Village Bajak. Both these projects were commissioned during October 1999 and are operating satisfactorily.

Another 200 KWp SPV Grid Interactive Power Project at Village Khatkar Kalan, Distt. Nawanshaher has been commissioned with 67% financial support from MNRE, GOI in the state. This project is feeding Solar Power in the PSEB Grid in the localized manner and providing power to 100 numbers of streetlights. Dr. A.P.J. Abdul Kalam, Hon'ble President of India, had dedicated this project to the Nation on the martyrdom day of Shaheed-e-Azam S. Bhagat Singh on March 23rd 2003. 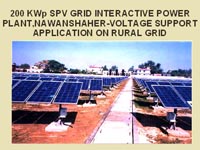 One SPV Power Plant of capacity 25 Kwp has been set up in the solar passive complex of PEDA in the year 2004. This project is providing 25 KW power for lightning, fans, computers etc. in the office.

A major rooftop programme for Solar Photovoltaic Power Project has been launched in the State under which the rooftop SPV Power Projects has been setup at various important Govt., Institutional and Religious buildings namely Punjab Raj Bhawan, Punjab Civil Secretariat, Golden Temple, Wagah Border, Punjab Agricultural University, Ludhiana and Pushpa Gujral Science City, Kapurthala. Rooftop projects shall be continued to be promoted in all sectors in order to enhance the share of solar power in the State.

Solar Photovoltaic Power Projects commissioned in the State are as under: